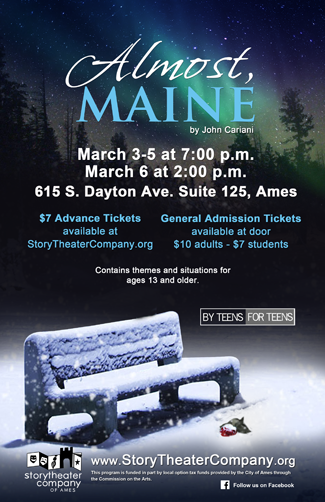 This show was designed to challenge the teens of  our community. We hope by being involved in every aspect of theatrical production, they will gain a sense of professionalism and come to a better understanding of the power of theater. In addition to being responsible for sets, costumes, props, dramaturgy, and stage management, the students will also learn to stretch a budget. Every actor cast will also be required to work on one of the design teams.

“A snowy charmer … These nine tales of love in the time of frostbite have a winning glow that proves surprisingly contagious.” – The New York Sun

Set on a harsh winter night in the mythical town of Almost, Maine, this play explores the messy relationships of its humble inhabitants. Dimly lit by the rare Aurora Borealis, we get a glimpse into some of the most vulnerable and hilarious moments the community has to offer.

Told in a series of magic-infused vignettes, this play is brimming with the joy and pain of love.

Where?  – Almost, Maine will perform at STC’s new black-box theatre.

*Listed below each department head are the members of their team. Each actor is required to participate on a tech crew.