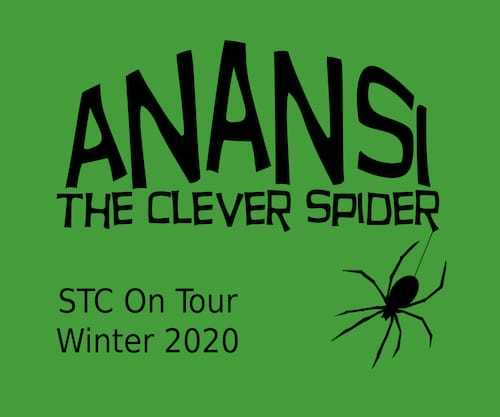 Based on the African fable of Anansi, the play tells the story of a “brave” spider’s desire to bring stories into the world and the difficult challenges he faces achieving his goal. Anansi must battle the python, outwit the tiger, protect himself from the hornet’s sting, and endure a frustrating encounter with Mmotia, the bad-tempered fairy. In addition, he even has to deal his critical mother-in-law! Though Anansi thinks himself clever through it all, it is only with the help of his wife Osa that Anansi is able to achieve his dream. In this fast-paced, humorous play, the message from the Sky God to Anansi applies to us all: when you share stories, you are richer for it.

Directed by Caisha Johnson, this STC OnTour production will perform several shows for Ames area after-school programs in February and March of 2020 with a final showcase performance for the public in April at STC’s Black Box Theater.

SHOWCASE PERFORMANCE and NEXT SEASON REVEAL

Regretfully, we are unable to hold our end-of-season showcase and season reveal this year. However, we are very proud of our cast and congratulate them on their successfully completed tour!